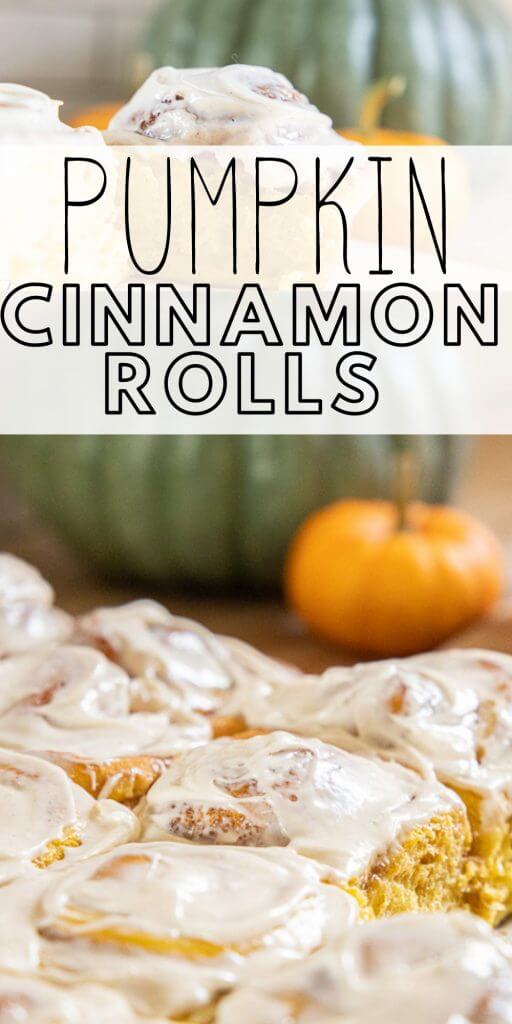 There is nothing better than homemade cinnamon rolls. I often wonder, are pumpkin recipes really that great during the fall? I will say a resounding YES! We are big fans of pumpkin treats, and today I have a goodie! I have adapted my favorite light and fluffy cinnamon roll recipe to make amazing pumpkin cinnamon rolls! These are the best gooey cinnamon rolls and I will promise you that you will love them. 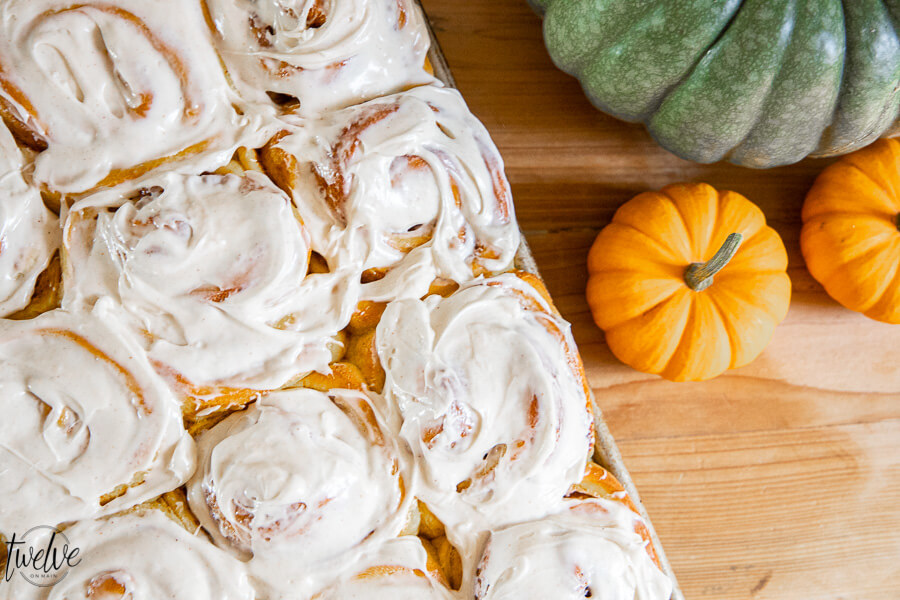 Now, I am still very partial to a traditional cinnamon roll, but man, just for a couple months a year, I can definitely get on board for these amazing pumpkin cinnamon rolls!

These pumpkin spice cinnamon rolls are mild and not overwhelming. My goal was to make sure they didn’t overpower with spice and pumpkin. With some people not being a huge fan of pumpkin spice, I wanted these to tow the line and be something that everyone can fall in love with.

I am sharing my pumpkin cinnamon rolls recipe with a slew of other amazing bloggers that are sharing theirs! There are so many amazing pumpkin recipes, make sure to check them all out at the bottom of the post!

This dough starts out with warm/hot water. You do not want it boiling. if your water is too hot, it will kill the yeast. This is common with any recipe you use yeast in. The yeast needs warm water, and some kind of sugar to be fed.

You want to put the warm water, sugar, salt, powdered milk, softened butter, and 2-3 cups of flour in the bowl of a stand mixer. (You can use all purpose flour or bread flour) Mix until all is well combined using the paddle attachment. I mix it on medium speed.

Add the eggs, one at a time.

Once they are mixed in with the dough, add one more cup flour.

Mix that in, and then sprinkle yeast, add it slowly and make sure it mixes in well.

Once the yeast is mixed in, you want to add the pumpkin, vanilla and pumpkin pie spice or separate spices. After that, finish adding the rest of the flour. I like to add it slowly.

You want this dough to be sticky. If you stick a knife in it and it pulls away easily and stretches, it is ready.

You want to knead the dough for about 4-5 minutes until the gluten is developed.

After the pumpkin cinnamon roll dough is ready, put it in a large greased bowl, covered with plastic wrap, and let it rise twice in a warm place, punching it down after the first rise. 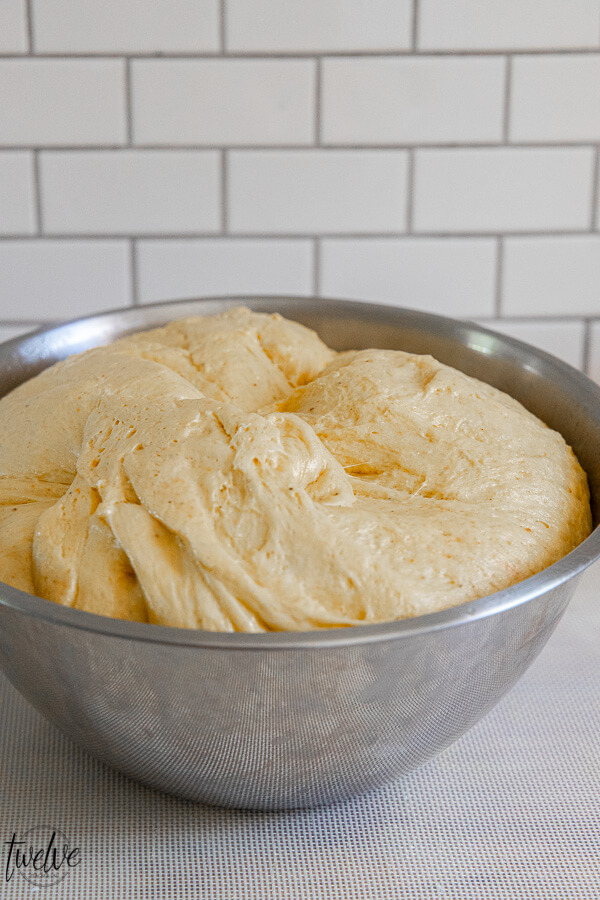 After the second rise, its time to roll it out with a rolling pin. 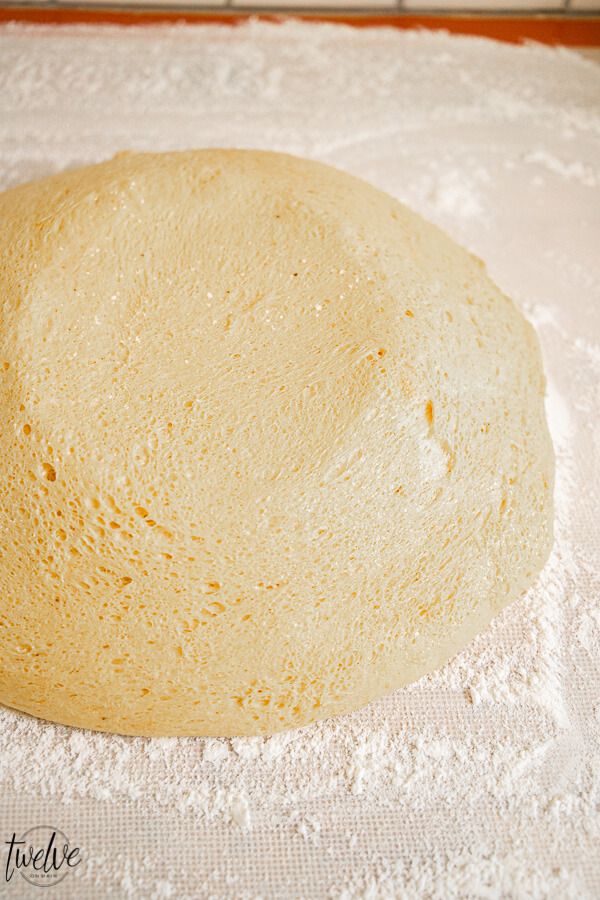 Roll the dough into a large rectangle on a floured work surface. I use my Roulpat to roll mine out. Mix the pumpkin puree, cinnamon, brown sugar, and spices together. 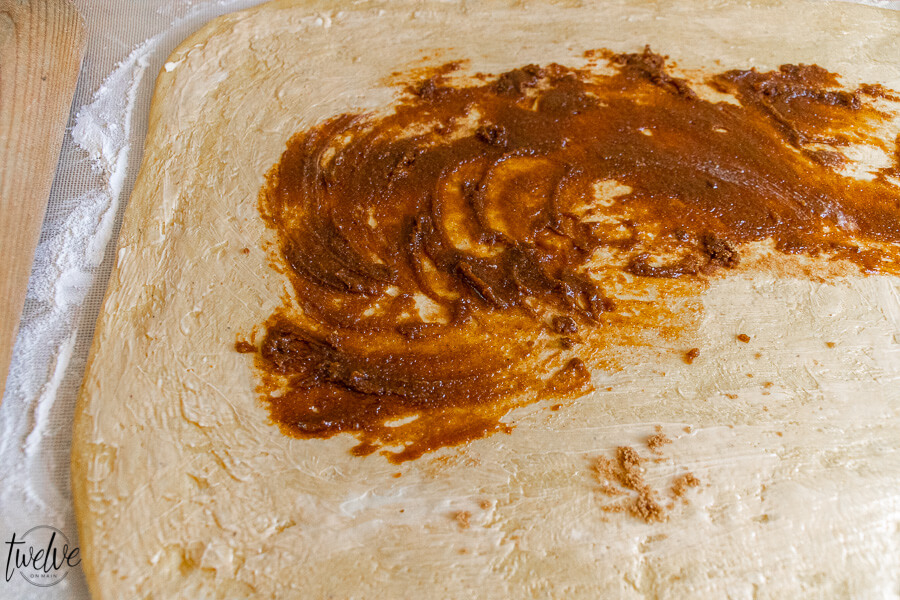 Brush melted butter across the top of the dough and then spread the pumpkin and brown sugar filling to cover the entire dough. Roll up the long side, like a snake and pinch seams. Use thread or dental floss to cut the cinnamon rolls into equal pieces about 1 1/2 inches wide. 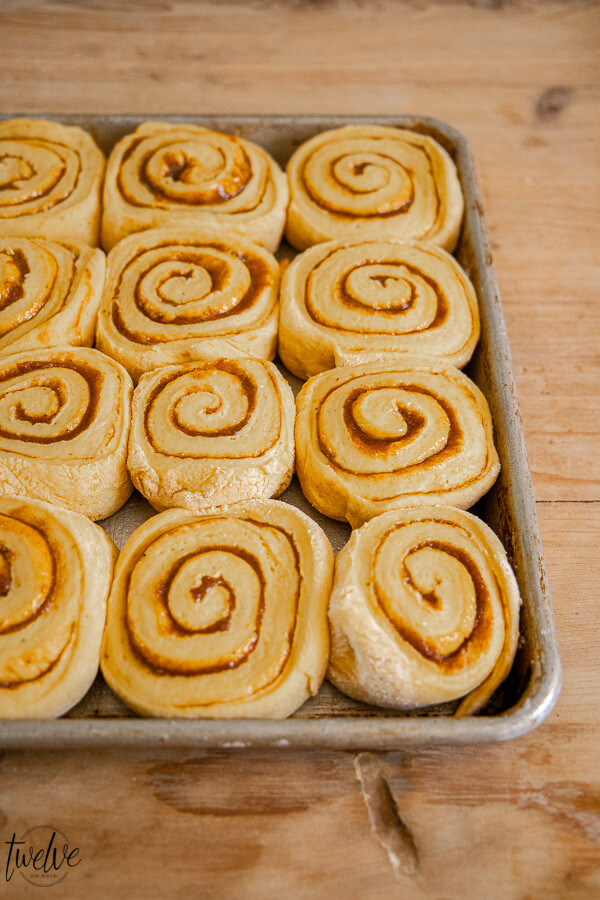 Place them in a sheet pan that has been sprayed with cooking spray or butter. I use the large baking sheet and place 4 across and 6 rows down.

Bake in the over at 350 degrees F for 20-25 minutes until the tops are golden brown. Top with my cinnamon cream cheese frosting. 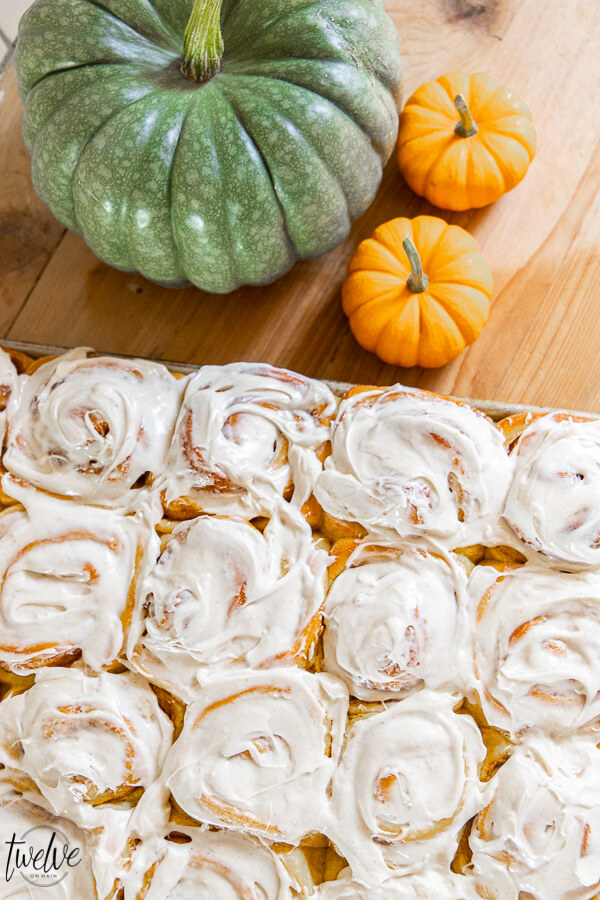 These are the most delicious pumpkin cinnamon rolls. The cream cheese icing is the perfect addition to the warm and spicy rolls. You could easily make a maple cream cheese frosting by adding some maple syrup to the frosting. This pumpkin cinnamon roll recipe is the perfect way to enjoy the fall or really any time of year. The pumpkin season is the reason.

8 Must Have Sourdough Recipes to Start Making Now

How to Make Banana Bread Your Family Will Love 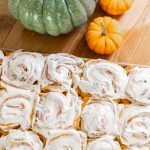 These pumpkin cinnamon rolls are amazing! 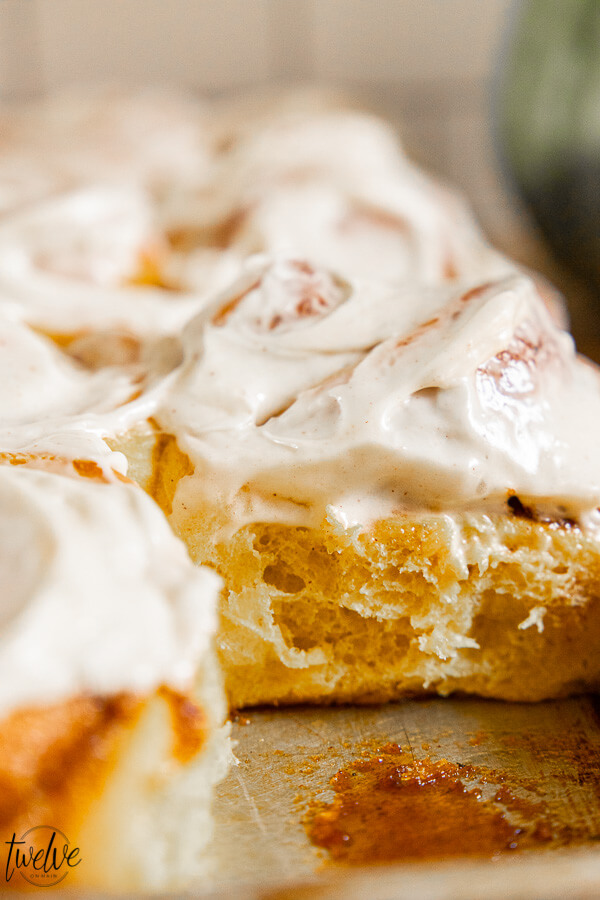 They have just the right amount of spice as well as that gorgeous light and fluffy bread texture. 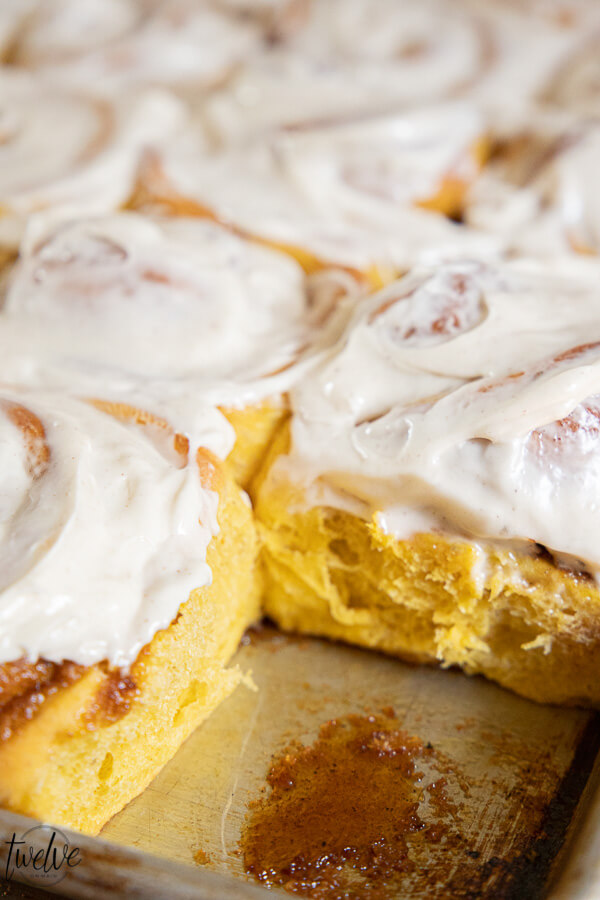 The have a beautiful golden color to them that scream fall. 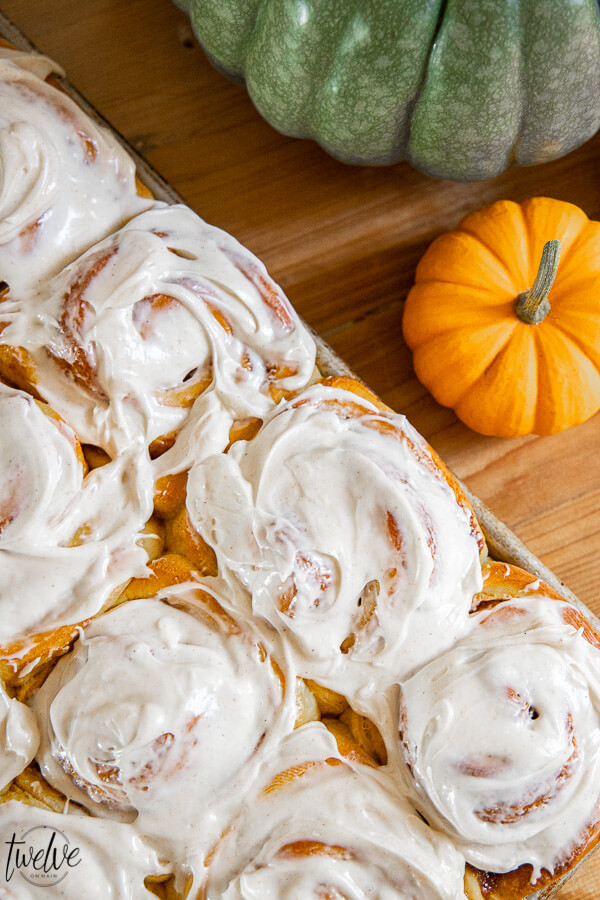 These are a great break from the regular cinnamon rolls. 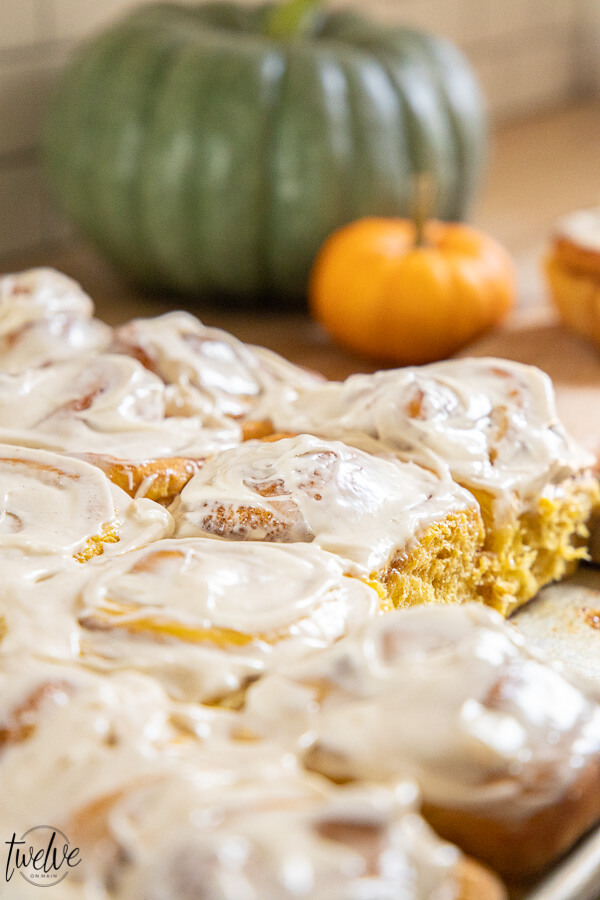 They are even better the next day. I love my cinnamon rolls at room temperature. You could enjoy a cinnamon roll with your favorite cup of coffee or tea. 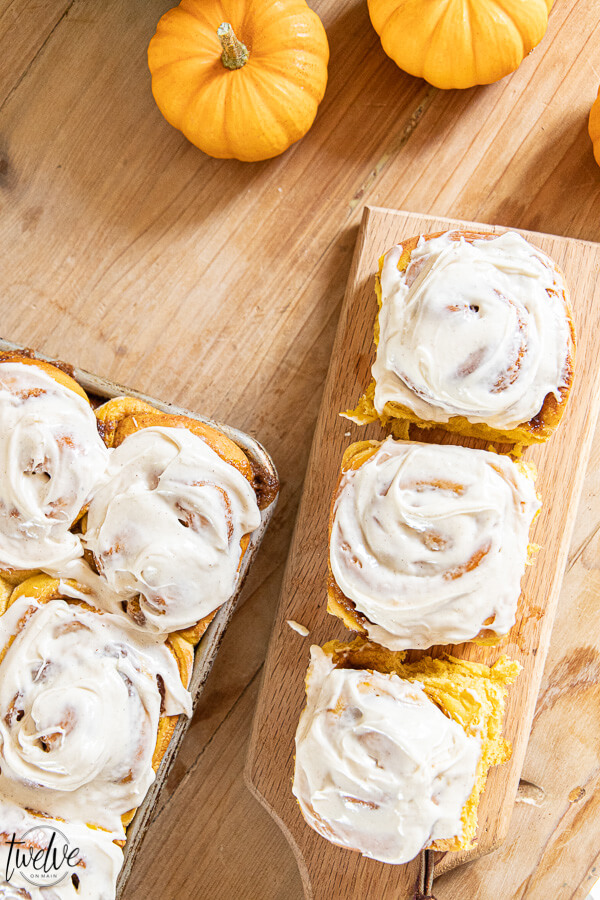 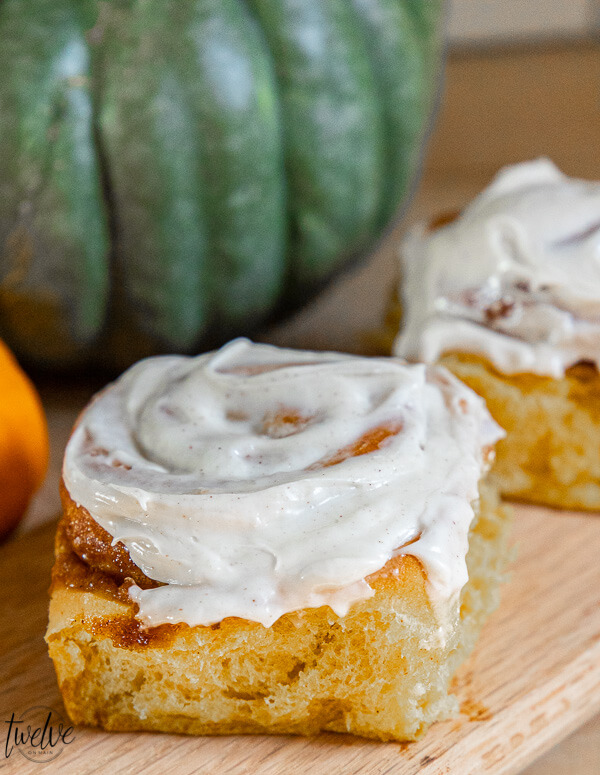 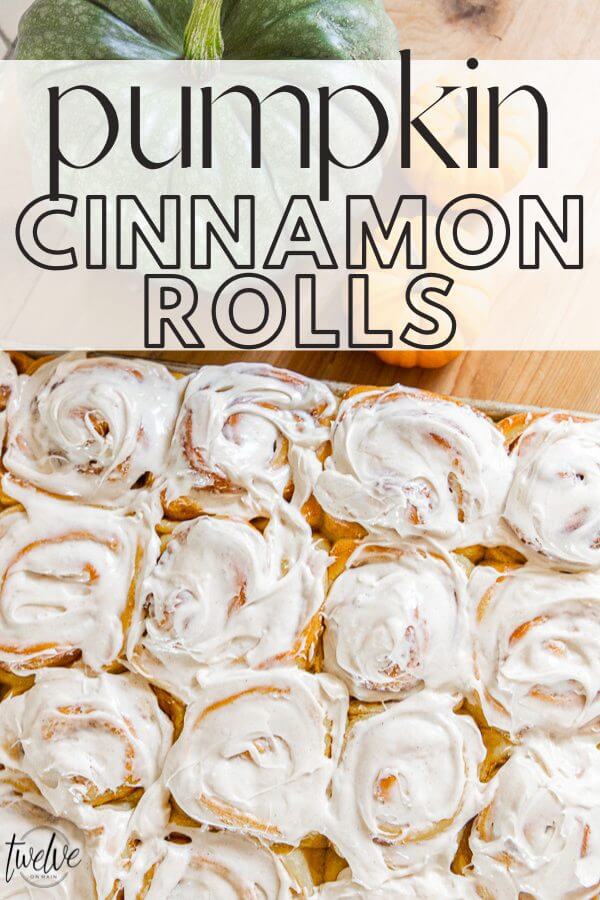 226 shares
« How to Paint the Outside of a House with a Spray Gun
New Apple and Pumpkin Fall Printable Art For You! » 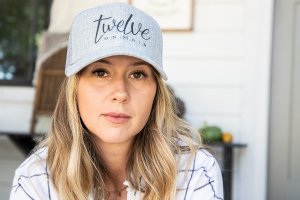 Check Out my Chicken Coop Plans!

Find What You’re Looking For